We Khanty people having been living in the forests of western Siberia for more than 2000 years. Our cultural heritage is based on our forest life and our subsistence hunting and fishing.

Today, although almost all Khanty speak Russian, at home and among ourselves most of us prefer to speak Khanty. Our Khanty language is one of the Finno-Ugric languages and very closely related to Mansi, another Siberian people, and more distantly related to Finnish and to Hungarian. Our language is the key to our culture. On Iugan oral tradition is still very much alive. We have two main kinds of stories.  Mont’ are stories about our gods and heroes. Like Russian skazki or folktales, sometimes fantastic events happen  in them. Iasyng are stories which are told as credible reports of something that really happened, such as very old historical events. On the Iugan today a cycle of iasyng, very much like an epic, is still in circulation, concerning a Iugan warrior chieftain of the sixteenth century named Tonya.  As summarized by the distinguished B. Iugan storyteller, Pyotr Vassilievich Kurlomkin: 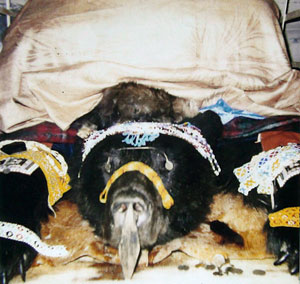 Above Ugut, there is a staritza (old river channel, now an isolated pond) and a small fort where Tonya lived. He was born on Ob’ but came to live here on Iugan. They say that Tonya put the heads of his enemies – Russians, Cossacks – on sticks across the staritza. The staritza had a whirlpool. There weren’t enough heads [to reach across the whirlpool] so he cut off a dog’s head and put it on the stick. God was angry with Tonya for killing the dog, because the dog did not participate in any of the fighting. Tonya married someone on Pim River; he went there, and they fed him fly agaric mushroom and he became drunk and they began to shoot at him with arrows, but they couldn’t kill him. The arrows hit him, and some stuck in, but they couldn’t kill him. He asked for a simple bow and arrow, not one with an arrowhead but one like a toy, and he shot at someone and pierced him. He said, “That’s how to kill people.”  He said, “You can’t kill me, but I’m punished by God,” and he went away. There was a small hill with a leaning tree and that’s where he died on Pim. They cut off his head and sent it to the Tsar in a box, and when the Tsar opened the box, he began to cry and he punished his servants because they had killed such a handsome man. They say that when he was buried, they came on the fifth day as usual, and they saw a bee fly up from the head of the grave.

Other Tonya stories tell of his miraculous birth, his battles with the Russians, his powerful bow, and so on. Tonya-related toponyms, such as Tonya’s Hill and Tonya’s Lake, continue to sustain this unique oral historical tradition on the Iugan.

The heart of our native religion and our hunting culture is the Bear Festival (pupi kot, “the bear’s house”, in Khanty), which represents the most ancient layer of Khanty culture. The Festival and honors the Bear as ritual ancestor and as Master of the Forest. The ritual hunting and killing of a Bear, who is understood to offer himself to men for just this purpose, is followed by an elaborate ‘bringing home’ festival, where the bear is made a guest in the house and celebrated for one or more days with songs, dances, folk drama, before being sent back to his sky-home.